Skip to content
Kelvin is a unit to measure the intensity of color.
Kelvin is also a pudgy baby brother with a buzz cut and bright parrot-green Hawaiian shirt.

But no shirt could match the green of his eyes, not in those days anyway.

The year Kelvin wore that green Hawaiian shirt was a very green year with plenty of yellow and orange days and only a few days that were absent of color, black hole days.

Kelvin, remember when you and I played in the mud puddle on the corner of North Main and Juniper? In those days all the roads were dirt except for North Main and each had its puddle after a rain.
No not a puddle.
A puddle is what you put your feet in and sink up to the ankles.
We could wade through water all the way up to our knees at least…more sometimes and that was when it got a teeny bit scary.
When the water rushed up to the thigh it was scary because in order to be that high it had to be running pretty fast. So we waited till it stopped running fast but still offered a place to swim.
We didn’t actually swim, but we sat down in it and let it rise up to our necks.
Remember how you drank it on a dare and said it tasted like chocolate milk? Your eyes were green green green that day and they laughed at me as a dare.
I don’t think I was as brave as you because to this day I don’t know what ditch-water chocolate tastes like.
Kelvin: a unit to determine the intensity of color.
We were older when I had a 45 record of Color my World, by Chicago, I played it over and over, mesmerized. You had heard enough. You Frisbee’d it onto the roof, where anything you could throw up there gave its life to the New Mexican sun.

The color of those days was red and orange/yellow. There were Indian Blankets everywhere, my favorite wildflower, and sandstorms during which red dirt walls could be seen moving into town, giving everyone enough time to take cover if they were smart enough to do so.

There were industrious red and black ants and they were my friends. When I think about that time period it reminds me of Mayan artwork. 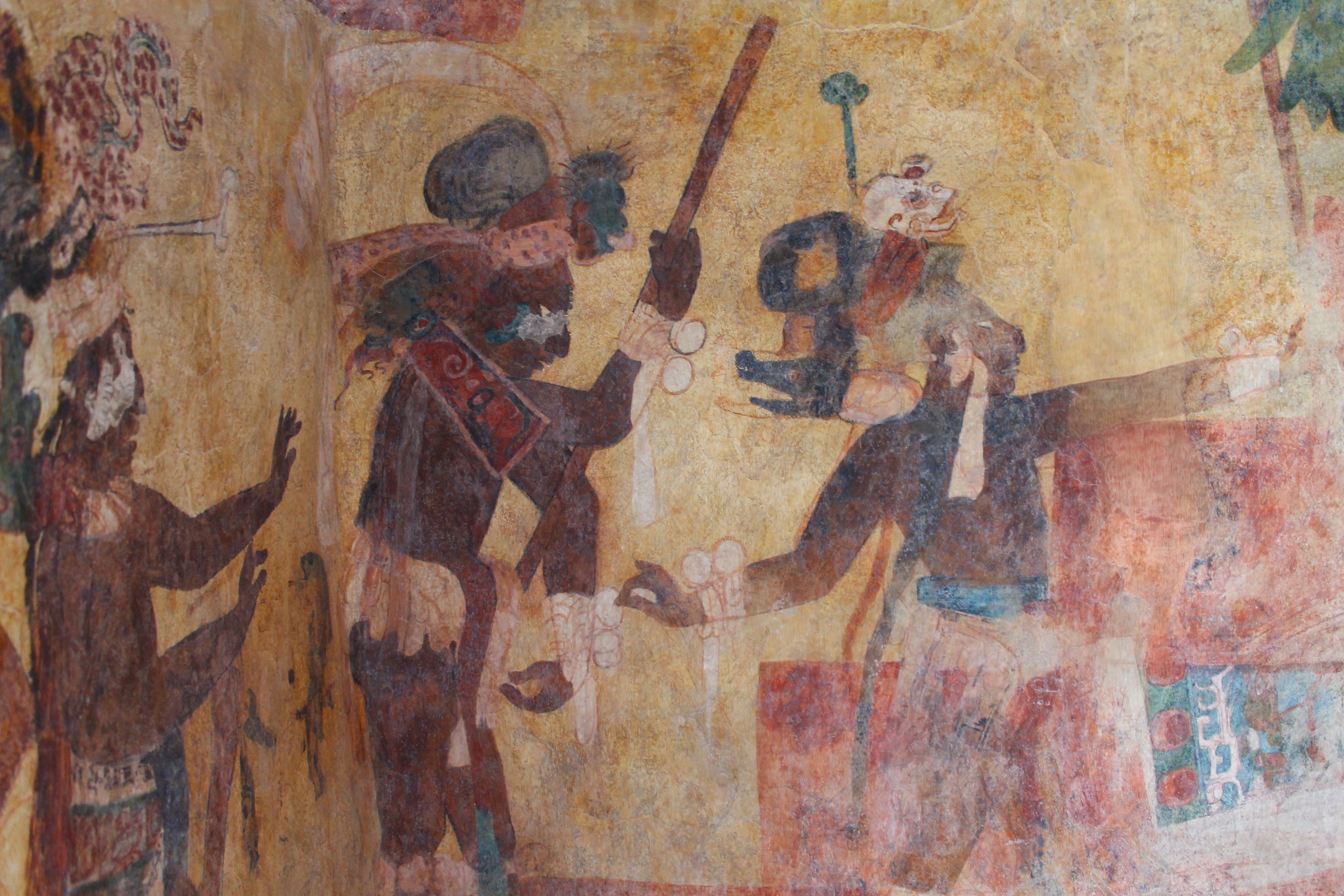 (bonampak_chiapas_13.jpeg)
I was so mad. I chased you with a broom ready to beat the mischief out of you.
I don’t remember catching you. I hope I didn’t.
You chased those boys that had ganged up on me at the city park that late night. Why were we there? How crazy to be in such a dangerous place in the middle of the night.
Mom took us there and let me out; I was going to run straight through to the other side but got trapped by a gang of paint sniffers. I was surrounded. They had knives.

You came to my rescue. You were younger than anyone there. How did you know to come for me? I don’t remember screaming or calling for help. I was too scared.

But you were Kelvin: you were able to measure the intensity of color even the color of danger in the dark with pinpoints of a dirty-yellow streetlight.
Remember when we were walking as a family along the railroad tracks and you found an unused tear gas? You always found the weirdest things. We took it to the police station; I was embarrassed because they knew our whole family by name.
Remember when we went to the same group home organization in Albuquerque? I was in a house called Casa Simpatica and you were in a house across town called? I can’t remember. It was the house where A Big Yellow Submarine ( compliments of local artist/houseparent) splashed in the sunlight outside of the French doors.
Of course, you would be placed in a house where artists did the decorating; you were Kelvin: you measured the intensity of color in the world.
My eyes are green too, but not like yours. Mine have the tendency to go yellow and scare people. Remember when those boys were picking on you and I went after them? I don’t know what I did to scare them, but when the air cleared, they were hiding in a closet, huddled together and would not come out till the house parent got there and made them come out.
What I could have done to scare them I cannot say. I don’t have a memory of it. I just know that they never ever bothered you again.
The night in the emergency room, when I thought you were going to die, I asked if we could pray the Our Father. I didn’t know what else to do. You were so out of it. I stood over you, holding your hand and sheltering you with the curve of my shoulders. My tears fell onto your face and I prayed that they could be like the waters of baptism and wash away all your pain.
You died at home a few days later
I miss you with the fierce intensity of all my colors.
Kelvin: September 5, 1962, died May 31, 2012
But, my brother, you never showed me how to modulate or adapt my own intensity and for that, I have paid a dear price.
I see tangerine dragons when my friends are happy and these cumulous beasts are majestic only because they fly; these dragons are not puffed up with pride or expectations–only a child’s joy. But it scares people because I can see them. No, it scares people that I tell them about what I have seen.
Kelvin, I need you to help me from wherever you are. Come and find me or tell me how to find you. Because I am still on this earth. Show me how to use the right filters, such as kindness, honesty, generosity, gentleness, fortitude, and all the others so that I will not inadvertently hurt someone with my anger or even with my love.