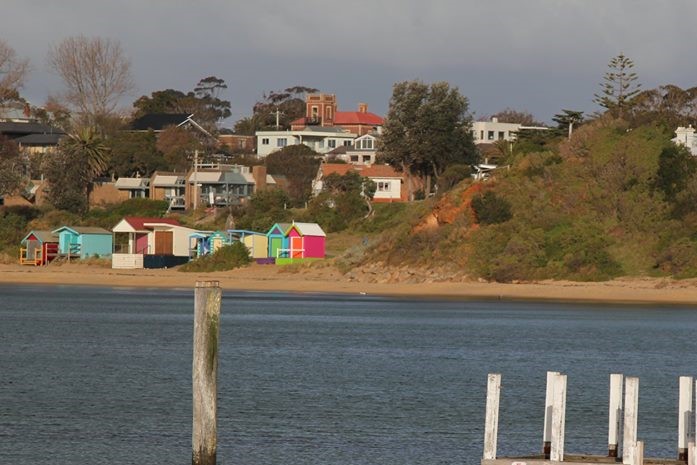 Once upon a time, in a little town by the water, a girl and her mother were sleeping side by side in the guest room of a cousin’s cousin’s sister. The house belonged to this relative and had been in the family for generations.

It was dark in the guest room, but not scary, even though there were many new sounds to be wondered about.
What was that noise?” The girl asked
That was the wind in the trees.” Mother said.
It was quiet then, except for the sweet sound of the wind whispering through the Aspen.
The girl was almost asleep and so was mother.
“Uhaa! What was that sound?” The girl asked as she snuggled closer to mother.
“Oh, that? Well, that was all the hens scooting over in their roost to make room for the hen that was the last on duty. She finished her chicken chores late and had to slip quietly through the gate and into the roost and that sound is the fluttering feathers of each hen scooting over.”
The girl thought about all the sleepy chickens until she felt sleepy too.
Until a creak creak squeak skip-skwip woke her right up.
“What was that?”
By now mother was so sleepy. She said, “Oh, that’s just the house walking on its nails.” And then she snored. She was fast asleep.
The girl did not know houses could walk, much less walk on nails. She began to imagine all the houses picking up their skirts and walking all about the countryside in the moonlight. She was a little worried that they would not find their way back to the right place by morning.
Soon, the rooster crowed and mother turned over to finish her dream. Then the birds in the trees sang all the morning songs they knew as they darted through the air and swooped low for breakfast bugs.
The girl remembered that the house had been walking on its nails all night so she ran to the window to see if everything was where it should be.
The little pink and yellow and blue bath shacks by the water were where they had been yesterday. Her relative’s house was in the same place too.
At breakfast, she asked her mother how the houses knew how to get back to their own yards after walking on their nails all night.
After a moment of bewilderment, mother realized what her daughter was referring to. She laughed so hard she snortled coffee out her nose.
“Oh sweetie,”she said, when I say a house walks on its nails I mean it just settles in, you know, it wiggles around to get more comfortable. Old houses do that.”
All the relatives laughed and clinked their dishes merrily as they enjoyed their breakfast.
Thank you, Virginia Warren, for the beautiful photo. I have been trying to write a story about the real events that are the crux of the story, but it never came into focus until I saw your picture. That was it! All of a sudden I  imagined all those houses dancing in the moonlight…the story then wrote itself.