Do you ever wonder what kind of alphabet the bark of a tree might be and what it would tell you once you learned to speak it’s language? Would you have to speak slowly, forming your thoughts over great stretches of time, making deep currents move through the the trunk and branches in a careful and connected way to make your point? Or would you be quick like the wind when it turns the leaves all at once, hundreds of phrase in one breath— imagine. Haha! It makes me giddy. How complex a language it must be, how rich the tones. And still, how simple if we are willing, and I know it’s almost impossible, but how exquisite a composition we encounter with all our senses if we could allow a tree to teach us the heart of true language which has always been simply to listen deeply before making a sound,, then listening deeply again. 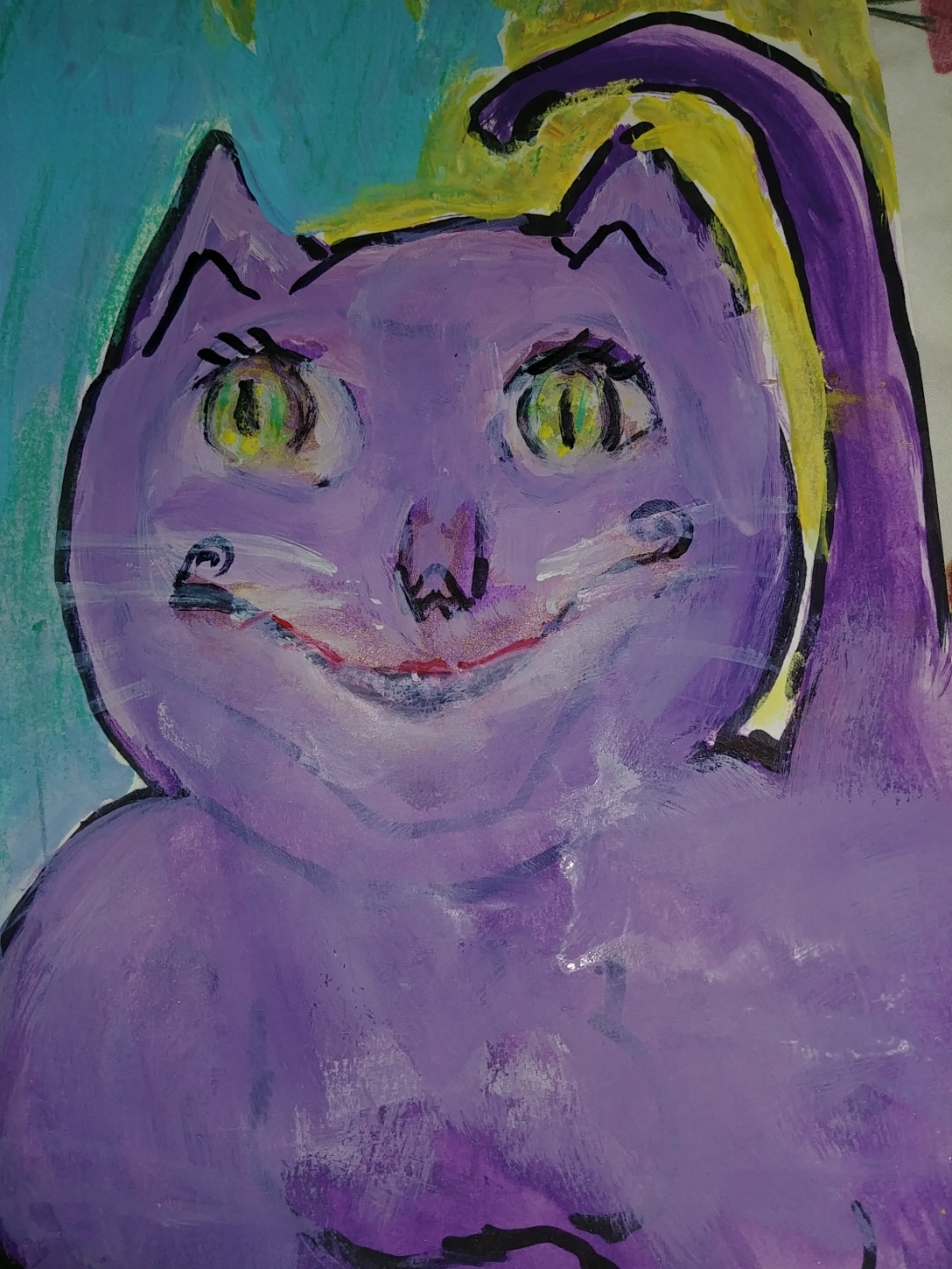 Dr. Diepold used to coax the strongest part of me out by saying, “Here kitty, kitty, kitty.” It always made me laugh, which was the whole point.

Cat is the nickname for the part of my personality system that always came so the rescue when things got really bad.

At first there were about 5 separate cats; there was fun cat, sex cat, sun cat, and I can’t remember the others. They were just cat-like helpers.

Like all the different parts, or compartmentalized aspects of personality, Cat was formed in trauma.

If there was trauma, no problem, I knew how to make it all go away. I could find something to fix my attention on till it was a teeny tiny point, a disappearing dot, an imaginary number like the square root of negative one while the rest of my mind did whatever it had to to survive without involving me.

The problem is that solving trauma by splitting, or dissociating only works temporarily. It actually compounds the real problem. Imagine having a blender that you used to chop up a tomato. It works great for the first one. But if one keeps using it over and over, adding tomatoes and carrots and watermelon and never cleaning the blender or actually using the produce more than a spoonful at a time, guess what happens.

I had no control over the chaos, nor could I process everything that was happening; I couldn’t make sense of it. I couldn’t even put it into a story or a picture or a sound that made sense or matched anything my mind had seen in the world that other people accepted as normal, so my brain made the traumatic events unreal; I’d turn them into a cartoon. People got killed and mutilated in cartoons yet the band played on through peals of laughter. How many times had I seen violence in cartoons for which no body blinked an eye? So that is kind of what my brain did because there was nothing else I could do.  I didn’t consciously decide to create a cartoon-like experience, it happened spontaneously.

This is where I think the Fourier Transforms, which act as a sort of centrifuge, might come into action. In my case, it seems as though a switch was flipped and my brain did its magic to whirl apart the components of the experience, but instead of reconstituting it exactly as it was, the experience became something easier for a child to live with and a cartoon land sprang up. Boing.

So, the first Cat was the version I used to call Fun Cat because she was and is strong and has developed past her immediate function into a jokester who loves science and language and is just plain playful. She does not go into cartoon land anymore, but if there are ever any signs of that happening “we,” collectively know to call for help because it means the situation is dangerous.

Sun Cat’s special ability was to close her eyes and bask in warm places. I’m not sure how that started–something to do with the meat locker where stepfather hurt the kitten that day, but I don’t know and I don’t want to know the actual trauma.  All that matters is that cats like to close their eyes and stay warm in sunny places. I could do that. It made me feel far away and dreamy; I could float like a dust moat in a sun beam.

Sex Cat is easy to figure out. Enough said.

These days there is a mostly integrated version of all the different parts. It took a lot of heart work. (Notice I didn’t say hard work.)

Living through the trauma was hard. The kind of work that healed me was tender and loving.

Dr Diepold did what he could, and it was a lot. He brought all the fragments into the open and helped me get a functioning work force together. But it didn’t keep me out of the hospital.

I met Elaine Prendergast Paulson during one of the hospital stays. She made a difference right away and appealed to the yogi in me. I had been doing yoga since I was 12, so at 35 I was more than ready for a therapist who could teach yoga as a part of recovery also.

She used another mind/body modality that was extremely helpful and that was called Focusing, developed by Eugene Gendlen.

There is much to be learned about how the body splits or compartmentalizes traumatic events. One of the things I hope to explore, based on little more than  armchair physics and from my felt sense of what it is like to switch into an altered state,  is Fourier Transforms as a way to explain or to help us discover an organic mechanism within the body/brain that spins our experiences into its component parts and then reconstitutes them to suit our current needs. All this happens at the blink of an eye if my experience holds true

In the early days of therapy, when the switching between mind states was still rather dramatic, I could feel my eyes roll in a hard flutter, up and back as I went from one personality to another and from one set of memories or another. That does not happen now that there is a free flow of information between all the parts of my personality. In fact, there is much less distinction between parts.

Everyone has some distinction between parts of personality. We have the part of us that goes to work and the part that goes to the party afterwards. But as we find peace with ourselves we are spontaneously authentic, wherever we are, finding that we can fit ourselves naturally to any occasion.

Today I had a minor setback because I thought I had screwed up a really fantastic opportunity to work with two highly talented writers and genuinely cool people. I spiraled in the FT blender but came out laughing with a funny blues song.

Please look for upcoming post on the Fourier Transforms and the Mind of the Heart as I delve into the phenomenon that makes it possible for human beings to withstand unimaginable trauma in imaginative ways.

This is a song for my grandson, for his birthday–and a good song to sing to start your day off on a positive note.

There is a river of love

I sing gratitude at the break of dawn for my

strong bones, brave heart, to live my life like a work of art;

I sing to the light to the misty bright to the love that makes me mighty.

Gonna walk the walk of mercy

gonna talk the talk of mercy

gonna be be your friend

gonna lend a hand gonna be the one you can count on.

Repeat x3 (put your hands on your heart while you sing this part.)

That’s what she said.

Ok. This is no joking matter! I worked on a blog post this morning and yes, it was pretty awful. But I could have fixed it. It was self serving, sort of, but not really. It only seemed that way at first glance, like a lot of my stuff. I write about myself because that is all I know. I am not an expert at anything else. So I use myself, usually as the bad example. Then I show how I have learned from my …experiences.

Which is what I am doing now.

I read the (now deleted) post to mom, who had encouraged me to share the Boa Constrictor Story in the first place and all she said was, “It sure was long.”

So. Back to the drawing board. But not till I kick a few cans down the road and feel just a wee bit sorry for myself.